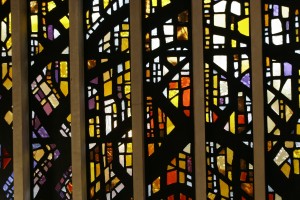 THE FEATURE WINDOW ON THE STAIRCASE

This window, which should be viewed from the vantage point of the first landing, was installed in 1968 by a local company and was designed by Arthur E. Buss (1905-1999). It is divided vertically into seven parts. The glass is made of fragments, a symbol of brokenness brought together.  Glimpses of light are glimpses of God.   The faceted glass is set in epoxy resin and follows the “Dalle de Verre” method, pioneered in the U.S.A. in 1954.

The designer A.E. Buss said, that the window symbolised, “the progress of the soul, from doubts and difficulties, through fire and light”.

Cardinal John Henry Newman’s poem, “The Dream of Gerontius”  was written in seven parts and was set to music by Sir Edward Elgar, in Worcestershire.  This window evokes phrases from the poem.

“Be with me, Lord, in my extremity”

“the fierce hubbub of demons in hell”

“O happy suffering soul!  Consumed, yet quickened by the glance of God.  Alleluia!  Praise to His Name!” 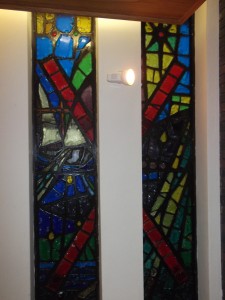 This was installed by Russell & Dorrell around 1988-1990 and the subject is St  Andrew.  His cross is a sign of humility.   The nets are a sign of a fisherman–“Fishers for people”.  (Mark 1:16).  The boat is a symbol of the church and the ecumenical movement.   The star is a sign of the light of God for guidance and a sign of  “Stella Maris”,  Mary the Star of the Sea.